BookYourHunt.com was started for hunters by hunters, and like all hunters, the team members have their favorite weapons. These things are more than pieces of wood, metal and plastic, more than just tools of animal harvest. Their value exceeds the price you can get for them at a gun shop. Their value is boosted by memories and emotions that are attached to these guns, bows or knives. Here are three stories told by BookYourHunt.com team members about their favorite guns.

What is my favorite gun? To many that question might be very easy, but for me, I’m very sentimental with my guns for an assortment of reasons.

My answer could easily be my worn but beautiful Ruger No. 1 in .375 H&H my beautiful wife surprised me with on our first Christmas together and has resulted in two Alaskan brown bears. Or maybe my new Nosler Model 48 Patriot that shared the cover of Sports Afield magazine with me and has already taken several mountain species including my very special once-in-a-lifetime bighorn sheep here in Idaho. How about my tack-driving Ruger Model 77 Magnum in .458 Lott that has been with me in taking game from warthogs to elephant and a few cape buffalo including a bull in the Caprivi shot straight down its throat at twelve yards coming at me in the dark.

My old $40 Western Auto 20-gauge bolt action shotgun comes to mind for its role in taking my biggest whitetail, a 209 inch bruiser from Iowa, and would always be treasured. It could easily be my Weatherby Vanguard in 7mm Magnum which has accounted for 14 of my 15 bull elk. My great grandfather Reed’s 1910 vintage hex-barreled Model 94 Winchester lever action that I found rusting in my grandma’s closet holds a place in my heart. As just a young boy I cleaned and oiled it back to life, but it is still in my father’s possession so technically not mine.

One of my most prized possessions is a gun that is much older than me and the gun I made my first kill with, my Grandma Reed’s Daisy BB gun. I found it on her back porch when I was four years old. It had sat in a box full of fishing poles and baseball bats for so long that it barely held enough pressure to spit a BB out of the barrel. She and I oiled it up and it slowly came back to life. She taught me to shoot it though I was so small the stock protruded substantially out from under the rear of my armpit. Imagine her surprise when I came running back to her excitedly proclaiming “I shot a bird! I shot a bird!”

We walked out and sure enough found the unfortunate blue jay that was my first hunted animal. It was also my first lesson in ethics and respect for the animals we take. Grandma nicely explained to me that we weren’t to shoot blue jays, only sparrows and starlings. She also said though she was very proud of me that we always should feel sadness in that we just took a life. We admired his beauty, put him in a box and gave him a funeral. Those lessons from my Grandma and that Daisy BB gun has stuck with me from age 4 through these subsequent 47 years of my life, and I will carry them to my death, passing them to my children and as many others as I can along the way.

So what is my favorite gun? I must give the obvious answer. All of them.

Every time I go to Africa, I go with a mistress. My wife knows and doesn’t object. My mistress is not a young supermodel – in fact, she’s a very old lady. She is my favorite gun.

She is from a Royal family and it is not an overstatement. Her full name is Holland & Holland model Royal hammerless, but I call her my “Old Lady”. She left the maker’s in 1906 – yes, she’s 111 years old. 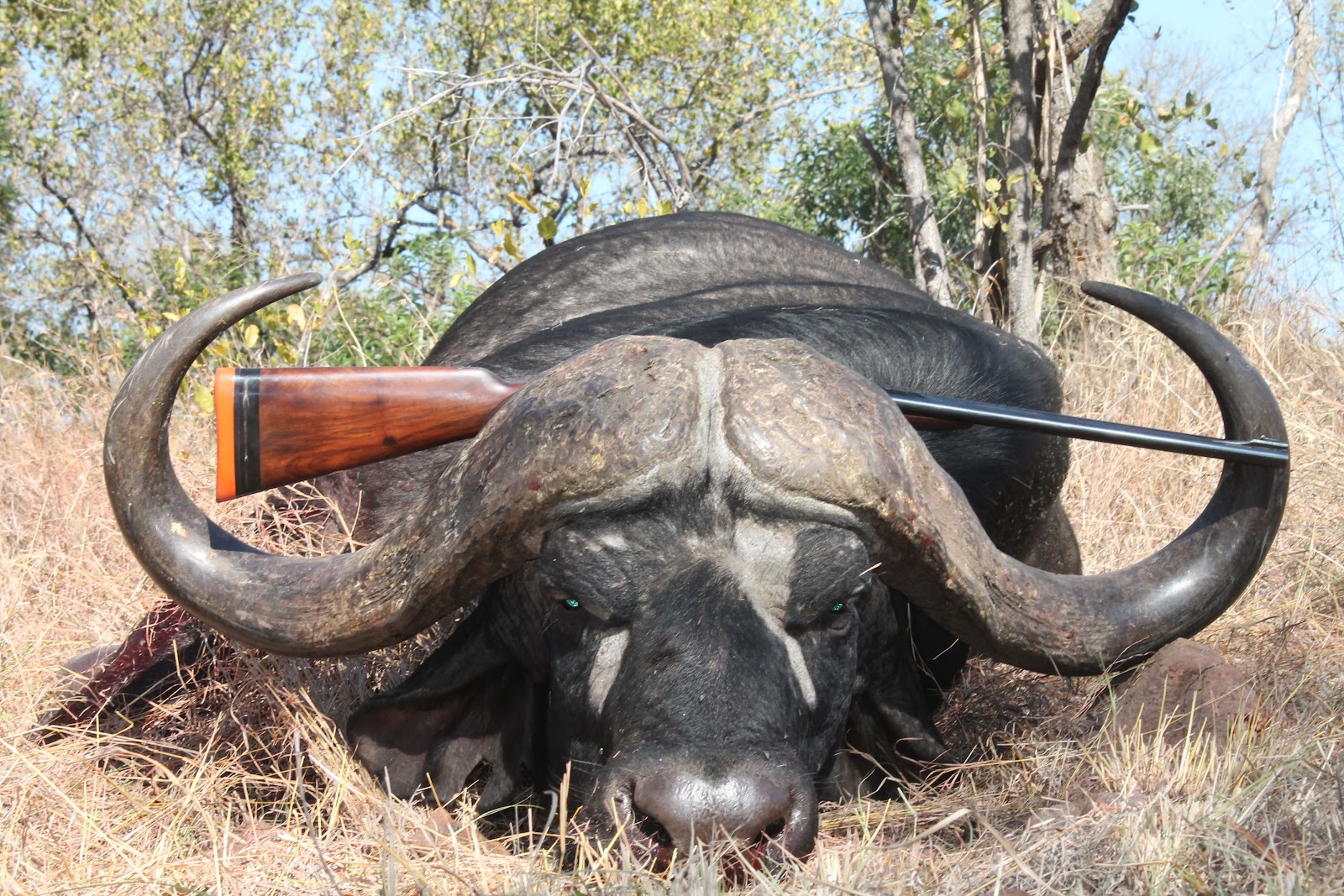 What is really special about this gun that it was not stored under the glass in a collector’s display. She was living a full and beautiful life in the place she was born for – Africa. The only thing I don’t know is how many dangerous African animals have looked into her big black eyes before going down. My guess – a lot. She is as deadly as a gun can be. No mercy and no regret. None of the 6 buffaloes that we met ever had a chance. Some were closer than 10 yards, some were standing over 50 yards. All are now on the walls of my house.

My Old Lady – my friend, my love and my life saver.

The gun I love most used to belong to my grandfather. It’s a Russian-made 12-gauge side-by-side shotgun, built-like-a-tank, and called Baikal Model Ij-54. If you care for technical details, it’s an Anson&Deeley type boxlock, with flat mainsprings, disk-set strikers and automatic safety. There’s no bells and whistles such as single trigger or automatic ejector, but it does have color case hardening, walnut stock and basic engraving. The 725 mm (roughly 28”) barrels are choked half and full, the most versatile combination unless you have to use steel shot.

My Grandpa was the perfect illustration of the old Western saying about the man with just one gun. He never owned more than one firearm at a time, and he seldom needed a second shot to harvest any game from moose to teal. He got this gun in 1968, I think, brand new, and hunted with it to the end. Even after a fight with cancer put a great limit to his physical ability, he would still go out with us. He’d stay in the camp, keep watch, build fire, cook dinner – with his gun at hand, and any legal bird or animal that dared to pass in range seldom lived to regret it. I can still see the shadow of the smile on Grandpa’s face when he would meet me at the camp, and I knew that smile meant his bag was on par or greater than mine.

My Dad has Grandpa’s gun now, and whenever I come to visit, I never miss the chance to take it out of its case. The touch of the smooth walnut on my cheek as I throw it to my shoulder brings back memories of the day when I first fired a gun – this gun. And many more memories of my first hunts, my first shots, my first game. Its market price is just above scrap metal now, the barrel browning and the color case hardening have worn off, and the action and stock bear scars from my clumsy attempts to take it apart. But it still feels better than many high-end guns I’ve handled.